This will be a page for collecting a number of short articles regarding the proper scale of items from the Middle Ages that are often reproduced incorrectly.

There are a few embroideries from the Oseberg ship burial and a relatively commonly-reproduced one is the five couched rings. 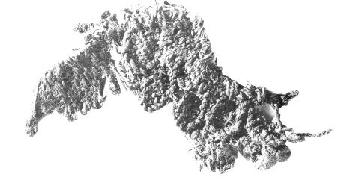 The base fabric is a silk and the embroidery is done in two-ply wool thread. The embroidery itself is worked along the remnants of a seam. Two strands of wool are used – a passive thread the forms the rings and an active thread that loops around the passive thread and secures it into place.(Ingstad) (This is very similar to the technique used in decorative elements in Birka – both embroidered and metal elements use the same active/passive pairing.) A line drawing shows the technique more clearly, though the relative scale of the two threads is off – they should be essentially equal:

The problem is that neither the photograph nor the line drawing come with any scale and the text does not provide any illumination either. If you look at the original picture in Oseberfundet IV, there are very faint grid lines behind the fabric where the fabric shades the background from the flash. (Unfortunately, these very faint lines do not reproduce well in the photo above – I am working on getting a better photo.) Assuming each square = 1 cm, the photo is produced at 80% of full size and the rings run (left to right, including three stitches at the top) – 15.4mm, 15.3mm, 16.5mm, 20mm, and 18.75mm. (Measurements via digital calipers.) Since the end ring is broken and obviously pulled out a bit and the second from right is also somewhat elongated, a goal of about 1.5cm per ring is about right.

This hangs together with Amanda Marksdottir’s estimation based on the thread size. A loose thread measures almost exactly 1.5mm wide, when the photo scale is adjusted. She used that estimate to extrapolate for a diameter of about 12mm or 15mm center point to center point.

So if you are interested in reproducing this embroidery, consider it’s proper placement along a seam and a probable size of 15mm diameter for the rings.